Yesterday, our little critter burned the index & middle fingers on his right hand on a pan while I was frying eggs & kielbasa. (Not very healthy I know.) It was SO sad.

I felt SO bad since I saw him fiddling with the stove knobs like he usually does but I didn't stop him. I didn't realize he grew tall enough to reach any higher. UGH. M fusses a ton when he's tired but he's not a big crier. But yesterday, he cried for so long and was physically freaking out. It was worse than when I took him to the doctor for his 15 month appointment and he cried so hard he threw up all over me. THAT was not fun either.

Anyways, he kept tugging at his right hand and rubbing it on my shirt screaming "All done!" which also means "All gone". He wanted the pain to go away but it wasn't so it was that over and over again. He was flailing his body all over the place one second and hugging me the next. He must have slapped me in the face on each side like he was hitting me with cymbals 4 or 5 times which was actually a little funny. I tried giving him ice to play with which he'd usually LOVE but he wasn't having it and was all over the place. Then I tried putting ice in a bag and held him down for 30 seconds here and there to cool off his fingers. I took a look at that point and was relieved to find that it wasn't that bad. I held him and walked around my house for about 30 minutes but he wouldn't stop the hysteria so I put him down and told him I wouldn't pick him up until he stopped crying. He was so good. He tried so hard to stop crying but couldn't completely and he'd let out a yelp here and there. I knew his burn wasn't that bad and he hardly ever cries because of pain so I realized he was just SUPER bothered by the weird feeling on his fingertips. I'll probably talk about it again in another post but genetics is a freaky thing. M is really "particular" aka anal and his type isn't from me. hahaha. The weird feeling in his fingers were driving him literally nuts.


Finally after what felt like an hour, he calmed down when I turned on Sesame Street for the 2nd time cause he wanted to watch "Eh-bee" (Abby), "Meh-mee" (Murray), "Eh-ma" (Elmo), "Bih-buh" (Big Bird) & "Goh-bah" (Grover). He literally listed all those characters between all the wailing and sniffling. That's how I knew he was feeling better. He was so tired from all the freaking out that he passed out while I was changing his diaper and clothes for his nap. Poor M. Mommy's sorry and will try to be more attentive next time. I was trying to make breakfast, entertain you, and figure out if E needed to eat all at the same time.

Even though I felt horrible, I realized that I'm learning to handle the guilt better cause I know there's only so much I can do at the same time. Also, I didn't feel as terrible as the day he hit his head on our coffee table and then an hour later I whacked his head against the dryer door. I totally drowned in guilt that day. I think that day was worse for me than my poor 6 month old.

Whenever I feel like a bad mom, I try to think bigger and tell myself that kids get hurt. It happens and it's okay and it sounds silly over little things like bumps and burns but God is in control of those thing too.


On a much brighter note, M is LOVING his new "pee-tee" tent that emo got him for Christmas. It arrived a little late but the timing was perfect because he's still got the remnants of his cold and has been cranky from the lack of sleep and bored of the few toys he has. He keeps all his stuffed animals in it and brings in whatever toy he's currently playing with. Hopefully he won't miss his turtle pool which used to hold all his animals. You can only patch that thing up so many times.

He needs a haircut badly, can you tell? 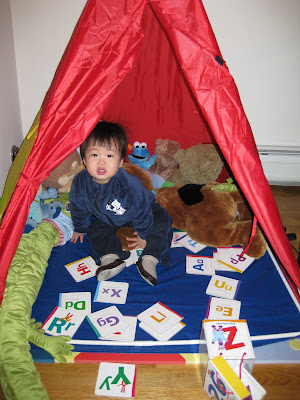 Only special people are allowed in the tent...like me. ha! He loves it when I scare him by shouting boo! and sticking my head through the door. My sister even made a moon and stars and hung them at the top on the inside.


His hair gets a little crazy when he's in the tent. Not sure if anything can be done about that. 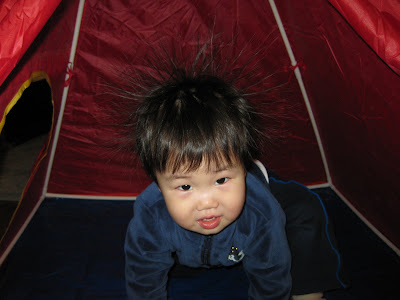 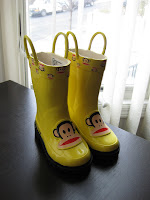 The other new "toy" is a pair of Paul Frank boots that "ah-juh-jee" (ah-juh-shee aka Fedex guy) brought yesterday. M calls all delivery people that. With all the snow lately, I've been dying to take Maxx to play in the snow but he's been sick so i "luckily" had time to order a pair of boots and mittens. SO cute, right? Cheap too.

The boots are a little big cause he's just about a size 5 now and they're 5/6. I had him practice walking in the boots also cause he's so used to his flexible pedipeds and now he wants to do it like 10 times a day. I don't mind since I'm running out of stuff for him to do indoors lately.

Practicing got him walking better but getting up & down still needs some work. And if you listen carefully, you can hear my mom talking about the burn from the am. :\