Initially, I didn't research many schools cause I had heard so many amazing things about First Presbyterian Preschool & Kindergarten (FPPK), a cooperative preschool in the area. I was all gung-ho about our decision until I had Iann in June. Then I started stressing about the childcare situation for my younger 2 for the few times a year I needed to co-op teach. I hadn't really planned it out in detail. So unlike me, I know. I should've just trusted my gut though, because after looking into a ton of other schools, I actually ended up back at FPPK for various reasons, but I'm so thankful I did.

At first, the parent involved aspect of the school was a little intimidating but after going to "Back to School Night", meeting M's teacher and now the first day of school, Gunn and I confidently know that we made the right decision.

If you're thinking of what schools to consider, I very highly recommend FPPK. The things I love about the school are:
:: I'll be able to be fully involved in the crucial first 5 years of his life, which in this case includes school
:: Maxx's teacher is awesome. She's has years of experience like most others but there's something special about her. She really gives you confidence that you've put your child in the right hands.
:: FPPK caters to the sensitive child that might need some hand holding
:: The first week of school is a flexible adjsutment period which is so great for kids attending school for the first time
:: His classmates and their moms are the kinds of people I like exposing him to, specifically other families that feel similarly about coop schools.

I know it's only the first day of school, yet I just feel that good about it all...and I'm so not a feeler.

We had been talking about the first day of school for months and then more so these last couple of weeks. We also watched the school themed episodes of Blues Clues and YoGabbaGabba. He was so excited when I told him about his very own cubby with his picture, where he can put his new backpack and jacket. He loved the idea of a bathroom with a kid sized toilet. He wanted to see Sprinkles again, the class guinea pig he met on our February tour.

I wanted to talk it all up but was afraid to go overboard because as with any sensitive child, with everything, you have to find the right balance between too little and too much.

I'm not sure what others mean when they talk about sensitive children but I'm not talking about the kind of child or person that gets hurt easily and takes things personally...although that often comes with the pacakge. I'm talking about the kind of person who's senses are heightened. Maxx can smell, taste, hear, feel and notice things that no one else in the room does. It's almost crazy at times. Things click in his head sometimes that I'm so amazed by. I'm not an early developmental expert by any means but I don't think it's typical. Or the fact that he talks about his feelings so much for a boy. (I know, I know, I sound like one of those crazy moms that thinks her kids are the best kids ever. I can't help it today. hee.)

If you know me well, you know that I have a reason & method to almost everything I do. Working on Maxx's attachment issues was one of the areas I put some effort and it really worked out great.

M was a rockstar! I'm so proud of him and happy for him.

If you know our Maxx, he's come such a long way. He was at the high end in the range of attached children. He literally used to be stuck to me like glue and would rudely dismiss most other people. It took me about 9 months of staying with him at sunday school for him to comfortable enough to go alone. I know, forever, but this was a huge step and totally paved the way for being ready for preschool.

Maxx didn't even flinch when I said I'd be leaving and would come back for him when he's done. He barely said goodbye as he was reaching for some trucks. I guess it comes off like the typical situation where the mom is more anxious than the kid.

I love, love, love, love our Maxx. I would never trade his sensitivity for anything. It's a special gift he has that one day he'll know how to use to do something really great. 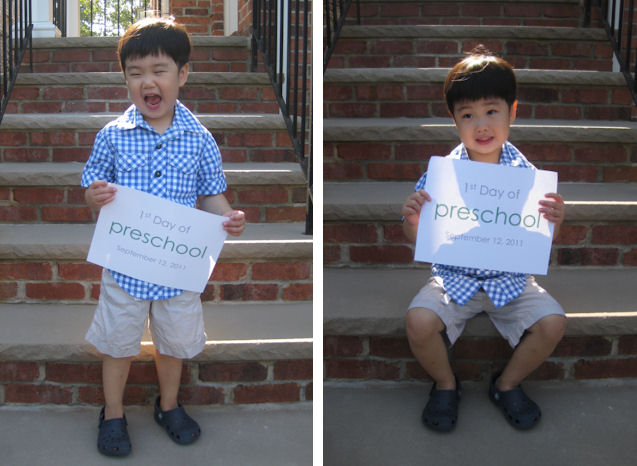 By the way, I received a ton of great advice from friends and family so I'm happy to share and answer any questions you might have about anything related. Of course, I'll likely be more helpful as the school year goes on.