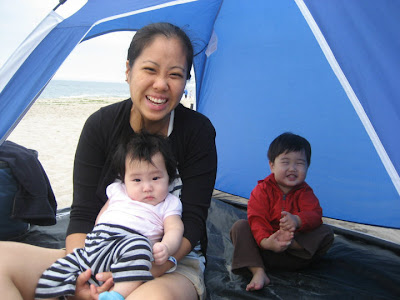 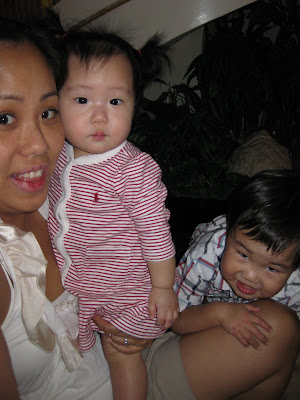 Life with an infant and toddler is finally doable.
For the first 3 months, I was busy being tired & anxious.
Months 3-6, I realized it's extremely hard but that if I set my mind to it, I could do it.
These last 3 months, I could confidently say I got it down.
It's not perfect by any means but I can do it pretty okay.
Thank God!

I can now appreciate them and G so much more now that I feel like my head is screwed (back) on...somewhat.

So on that note, I'm not one to say proud things but i LOVE my kids and they're so FREAKIN' cute and smart and funny and fun and just plain AWESOME. hahaha~

Ellie now pulls up to standing position all the time and all over the place. She started crawling at around 8.5 months in this crab-like/monster way to get around. I later realized she only crawls like that on my wooden floor to get some leverage. On carpet, she seems to crawl normally.

Today, I found her standing 3 times, holding onto nothing for 2-3 seconds each time...wonder if she'll walk before she's one. She's starting to cruise too. For all you moms out there that may not be able to give your 2nds enough tummy time or attention and feel guilty for it...please don't! They seriously figure it out on their own. I was feeling so bad that I had her swaddled so much and didn't do tummy time and now E's gross motor skills are much faster than M's were by this age.

E is blabbing something constantly. She has been saying umma & appa (mommy & daddy in korean) for a little bit now. She's said the sounds at random times when she was younger but now, it'll come out when she wants us or needs something so we know she gets it. Her 2 "tricks" for the older korean crowd are man-seh (raising both arms) & jjakjjakkoong (clapping). We're currently working on jem-jem (opening & closing both hands repeatedly).

E also laughs and smiles really easily. She plays extremely well by herself and is so good in new environments and with new people. She'll sometimes be scared for a bit, but then quickly adapts. E is as stubborn as they get though. She is VERY vocal about what she likes and dislikes. The hubs says it comes from me....oops. :)

My only tough area with her is her eating. She LOVES milk and barely ate baby food for the last 3 months. I told myself I'd hold out for 3 months and then give her table food. I probably should've given her table food a little sooner. On her 9 month birthday, I started giving her jook (korean porridge), bap & gook (rice & soup), and literally in one day she started eating like a champion. Like mother like daughter, genetics are scary. Supposedly, I had bap and dwenjang jigae and kimchee starting from 7 months...I question my mother as to why you'd give a 7 month old kimchee!

Anyways, I wouldn't recommend giving a young baby table food if you can help it but literally that night, she started sleeping straight through the night. It's now been almost 3 weeks of that. 11 straight hours of night sleep. That is straight up awesomeness. E sleeps SO MUCH, i LOVE it. She sleeps 11 hours at night and takes 3 naps during the day which total 4-5 hours. And her naps are completely regular. Good, regular eating really helps with good, regular sleeping. All this sleep, along with her personality, allows her to be flexible on the days we're out and she's totally off schedule. The only down side is that I end up leaving her napping at home with my mom, instead of taking her out. Yes, I'm a semi-sleep nazi. 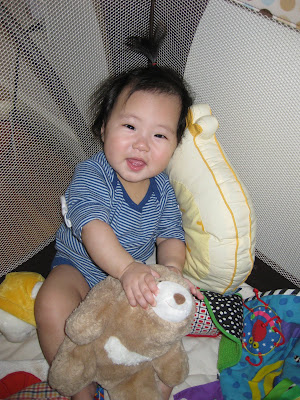 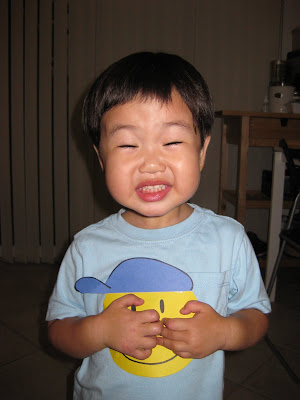 I'm SO proud of M lately. He's such a big boy now. He's my shy child. If he has an "area of improvement" it's in the social development area. He's not a fan of strangers, large groups and new places. For these reasons, I enrolled us in a Mommy & Me program at Hope Church in Teaneck, NJ. The rigorousness wore us both out at first but I'm SO GLAD we did it. It affected his sleep at first but he adjusted and is back to being a great sleeper. He still has a hard time with large groups but he's SO MUCH better with strangers and new places. He used to be stuck to me like glue anywhere new we went, or when a new person was in our house. Now he needs me for the first couple of minutes and then he's comfortable enough to wander around and explore on his own.

M gets funnier and funnier everyday. He randomly imitates things and people all through the day.


what am i from joohyon doo on Vimeo.

He sings and does motions to so many songs now, in english & korean, I can't keep track. He could literally sing and dance all day long if I did it with him. He's knows his alphabet, can count to about 14, then skips a couple before he hits 20, and now finally also knows his colors. (I felt like I was working on that one forever.) The other day my SIL's friend mentioned that kids with good language skill early on usually have a good memory. I never connected his memory with what he's good at, and what he's not but it makes complete sense. He's good at memory related things over the logical/understanding things as far as I can tell...which explains why colors took him so much longer than letters & numbers.

He's much more self sufficient - eating better on his own, drinking from grown up cups with less spills, taking shoes on and off (crocs), going up and down stairs on his own, putting things back where they belong, cleaning up, getting things for me to help me around the house, and the list goes on. He understands concepts and has sharper sense lately too. Today, my sister was trying to tell me something he did and was spelling out everything and using difficult words to explain it. He was staring at us from the corner of his eye trying to figure out what we were talking about cause he KNEW it was about him. I wish I had a picture of the look on his face.

M also started peeing in the potty. It's not regular at all but he's done it a dozen times so I think he's comfortable with it enough to start soon. I just received the rest of the cute 2-3T undies in the mail but I think I'll wait for grandma to return from Korea before I go full force with the training. I just can not deal with pee anywhere else but in the potty. 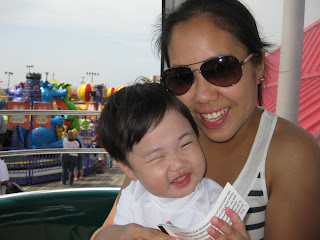 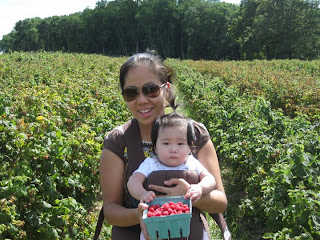 M is my sensitive, smart, funny, curious child.
E is my sweet, stubborn, bold, easy child.
I'm finding both of them are extremely determined. E in the stubborn and strong way and M in the slow and steady way. I continue to pray for gentle strength for E and for M, confident strength in doing God's work.

They now play together and entertain each other. It's so cute to watch them interact. M gives E hugs and kisses randomly. And E's eyes light up when she sees M...even a mere picture of him gets her all excited.

A picture I took in the middle of some hyperactive silliness. 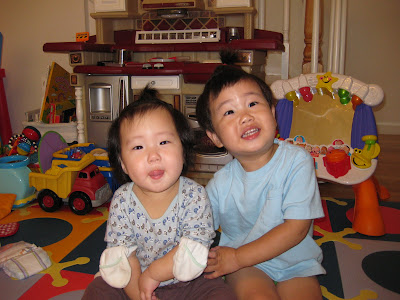 PS. totally need more pics of me & the hubs!
Posted by joohyon78